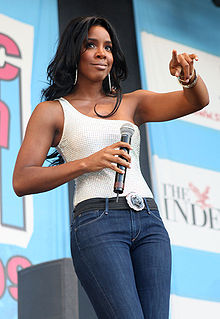 Rowland was born Kelendria Trene Rowland in Atlanta, Georgia, the daughter of Doris Rowland Garrison and Christopher Lovett, who were married after Kelly was born.[4] When she was seven, her mother took her and left her father, who was an abusive alcoholic.[4]

At the age of eight, she relocated to Houston. Rowland was placed into a rapping and dancing group, along with friends Beyoncé Knowles and LaTavia Roberson. Originally named Girl's Tyme,[5] they were eventually cut down to six members.[6] West coast R&B producer, Arne Frager, flew into Houston to see them and eventually brought them to his studio, The Plant Recording Studio, in Northern California.[6] As part of efforts to sign Girl's Tyme to a major label record deal, Frager's strategy was to debut them in Star Search,[7] the biggest talent show on national TV at that time.[6] They participated, but lost the competition.[8][9]

To manage the group, Mathew Knowles, Beyoncé's father, resigned in 1995 from his job as a medical-equipment salesman.[10] He dedicated his time and established a "boot camp" for their training.[7] At this time Rowland moved in with the Knowles.[11] Not long after the inclusion of Rowland, Mathew cut the original lineup to four[6] with LeToya Luckett joining in 1993.[12] Rehearsing in Tina Knowles' hair styling salon and their backyards, the group continued performing as an opening act for other established R&B girl groups of the time;[12] They auditioned before record labels and were finally signed to Elektra Records, only to be dropped months later before they could release an album.